On Wednesday this week I had a fantastic day in London with the successful Jisc Student Summer of Innovation projects. Building on from last years project, I think this is one of the best things Jisc has ever/is doing. It truly is putting students at the heart of the student experience. If you aren’t familiar with the programme you can find out more here. Basically students pitch their ideas for improving the student experience online, then via a process of voting and review a number of projects are selected to receive funding to develop their ideas along with mentoring and advice during the process.

I managed to spend a day in August with the projects as they refined their original ideas, and this week it was inspiring to see just have far they have all developed in such a short time. What fascinates me too are the clear themes and issues that the students themselves are identifying as areas that need new student facing services.  Feedback, study support, mentoring support both in terms of students at uni/college and those about to start all featured last year as well as this.  Hearing statements from students during their pitches stating “there is no culture of feedback in HE’ is a wake up for all of us. I don’t think there is a Uni in the country just now that doesn’t have some kind of assessment and feedback project/guidelines/support, but clearly some students aren’t seeing the impact of those yet.  Data was a big thing with the projects too – analytics, dashboards formed a large part of the pitches from a number of the projects.  This may be partly due to smart thinking from the project teams.  Data  and analtyics is not only an area that Jisc  is very keen to develop new services in, but it is also a reflection of the “data is the new oil” mentality in software development more generally. There are still huge assumptions that data from every service will actually be useful and that people (staff and students alike) will have time and capability to act on it in meaningful ways.

Alan Greenberg, former Education Executive at Apple also gave talk on “education technologies, insights and contexts”.  His insights into the business side of developing technology for the education sector was I’m sure invaluable to the projects.  I have to say, parts of it made me slightly uneasy as it did seem to be leading to a very content centric, and reductionist data driven view of education.  I know ultimately Jisc does want to develop some of these projects as market ready services, which is great. But imho, the strength of this whole programme is the experience that it is giving the students. Not all the ideas will be able to become services, or be successful.  Not all the project teams have time to fully commit to them as they are still studying. However the impact of the experience they are part of will stay with them, and having this safe space to experiment is really, really important. I’m sure it will stay with them for the rest of their lives and impact on whatever they do next.  Below is a my sketch note of Alan’s talk (note to self, don’t leave home without ipad or coloured pens again!) 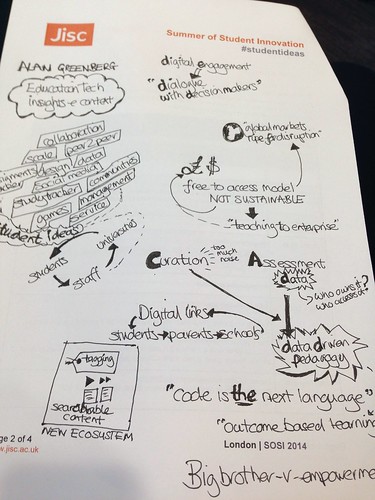 And finally, something I was going to write about last week but didn’t. Following David Kernohan’s “you’ll never hear surf music again” talk at ALT-C and the general “twitter isn’t what it used to be we need to move somewhere else” debate, in an attempt to keep up with the #edtechhipsters, I’ve been looking at Known, a new social publishing platform. Last week I wasn’t quite sure how I would actually use it and how/where it fitted into my existing online spaces. However last night after voting in the Scottish referendum, I want to share something more than a tweet or Facebook status update on how I was feeling. I remembered  Known and I’m now seeing it as a counterpoint to this blog, which will remain very much work related and focused.

How Sheila Sees IT

This work is licensed under a Creative Commons Attribution-NonCommercial-ShareAlike 4.0 International License.